Carbon dioxide capture and geological storage (CCS) is one of several key low greenhouse gas emissions technologies identified by the International Panel for Climate Change to reduce greenhouse gas emissions and the technology is being deployed worldwide. Burning fossil fuels such as coal, natural gas and oil releases carbon dioxide (CO2) and other greenhouse gases (GHG) to the atmosphere, adding to the potential for climate change. In CCS, the CO2 is captured from stationary emission sources such as power stations or industrial facilities before it is released into the atmosphere. The captured CO2 gas is then compressed to a dense, liquid-like fluid and then injected into sandstone rock reservoirs deep underground (typically ~2km), thus preventing it from entering the atmosphere.

Sedimentary rocks, particularly sandstones, can contain large volumes of fluids (e.g. water, hydrocarbons, CO2, and other gases) held in microscopic voids or pores between rock grains. These pores can form up to 30% of the rock volume. Where the pores are interconnected, the rock has permeability and fluids can flow through it. It is within these microscopic pore spaces that CO2 is injected and geologically stored. To ensure that CO2 remains trapped, it is important to select a site that has an impermeable cap rock (the seal, or "lid") immediately above the reservoir such as a mudstone or shale. The CO2 will accumulate under the cap rock and remain trapped. Through a combination of careful site selection and comprehensive monitoring, geological storage has been proven to be safe and secure. Australia's first geological storage project is CO2CRC Otway Project, which has been operating since 2006. 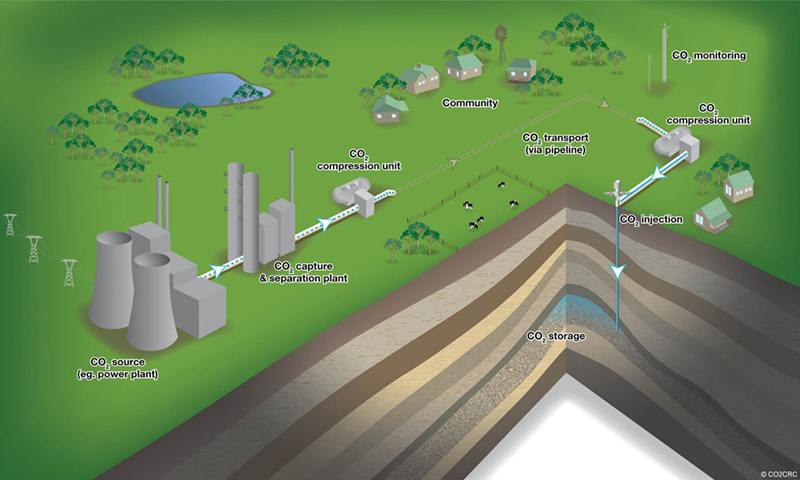